PLUTO-MOON AND SCORPIO MOON: secrets and conspiracies in history from Zola to Wikileaks 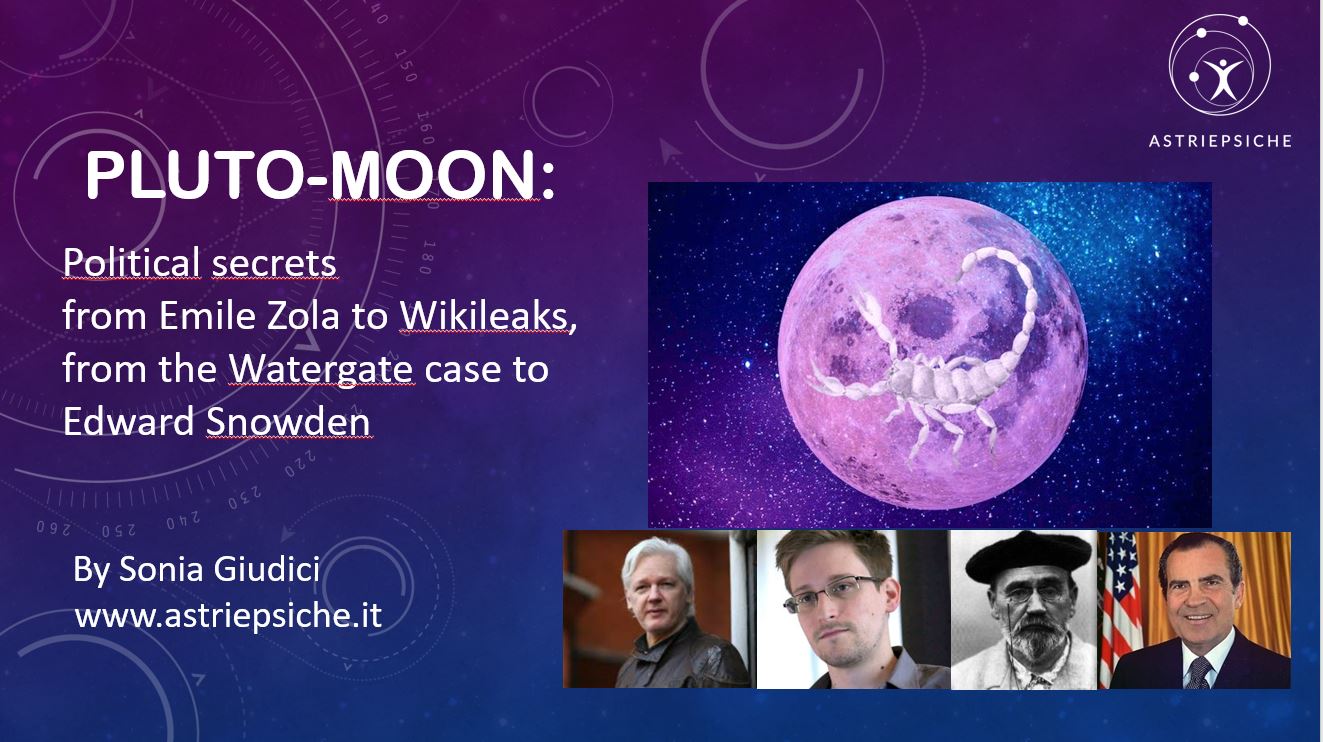 The following article is a transcription of Sonia di Astriepsiche's speech on the occasion of the 2019 Conference of the Astrologers Association of Great Britain.

When I read this year’s conference title  “From lead to gold”,  I thought it was  a perfect match with the principle that we can turn any shadow or challenge described by our natal chart into a personal asset.

Thinking about astrological challenges, what immediately comes to my mind is the relation between Pluto/Scorpio and the Moon in a chart: two archetypes that are very far one from another and not easy to integrate. The first relates to emotional nourishment, mothering, embracing and emotional needs in general, while the second one is so dark and tense and obsessive. Both of them are emotional, that’s right,  but in a very different way. The relationship between these two archetypes is never easy both in case of a Scorpio Moon or if we consider aspects between the Moon and Pluto. Clearly, having harmonic aspects between the two planets is less challenging than other configurations, but still hard to manage.

So what could be the gold we can extract from the potential lead of a Scorpio Moon or the Moon-Pluto aspects?

Well, Pluto/Scorpio is about digging in the depth obscure areas of life, it’s about power, it’s about manipulation, mysteries and hidden facts, but its potential is to bring to light what is hidden in the darkness of the underground. Pluto hides but also reveals the truth: the bad part of it is that, in doing so, it usually requires a painful transformation process.

In delineating the results of my research, I will show how Scorpio Moon or Moon-Pluto is a common element in charts of people who felt a profound emotional need (Moon) to go deep into mysterious situations involving the dark side of power (Pluto/Scorpio) and bring truth to the surface, so that everybody could see it.  Many of them, had to face harsh plutonian consequences  following their decisions: since Pluto is never mild, we will see that in many cases, satisfying this need, came at a high cost.

Recently, Julian Assange was arrested after escaping abroad. The Australian IT expert released more than 251.000 confidential US diplomatic reports on November 2010 and he is now one of the most wanted men by the US Government. He is also the co-founder of “Wikileaks”: the renown website whose mission is publishing secret documents: state documents, industrial secrets, military and financial reports. The idea of taking care of people (Moon) revealing information related to some sort of power (Pluto) is quite evident here.

If we look at his chart (click here) we notice a Scorpio Moon but also other plutonic elements:

The idealism that stands behind his acts (showing that the trigger of his actions was a genuine feeling) is stressed by the following elements:

Please also note that there are no planets in earth signs: this feature will become important at a later stage.

Please also note that there are no planets in earth signs in this chart.

A coincidence? Maybe, but let’s have a look at another person who faced a similar experience including revelations, mysteries and escaping abroad.

You may remember him:  he is a US citizen currently living in Moscow. He had to leave his country after he found out and revealed that the US secret services were spying on the most prominent international  heads of state and US people. According to what he said to journalists, he felt the urge to do so just for the sake of the truth: actually his personal story confirms that he has always been quite faithful to his country: he joined the army, than worked for the National Security Agency and then for the CIA.

His chart (click here) shows a Scorpio Moon as well, and some additional similarities with the Assange chart:

There are no planets in earth signs except for Pluto which is not relevant as it is not a personal planet.

Another coincidence? Ok let’s go back in history to see if we can find support for  this idea of Scorpio Moon as indicator of truth seekers.

You may recall the Dreyfuss affair and the famous article known as “J’Accuse” written by the French author Emile Zola. Just let me recap the story  for those of you who are not familiar with it. The Dreyfus affair was a scandal that rocked France in the late 19th century and deeply divided the country, not just over the fate of this man but also over a range of issues, including politics, religion and national identity. A Jewish artillery captain in the French army, Alfred Dreyfus was falsely accused of passing military secrets to the Germans: he was court-martialled and found guilty of treason. After some time, when the new head of the army’s intelligence unit uncovered evidence that another French military officer was the real traitor, he was discouraged from continuing his investigation, transferred to North Africa and later imprisoned. The story twisted when a French newspaper published an open letter titled “J’Accuse…!” by a well-known author,  Emile Zola, in which he defended Dreyfus and accused the military of a major cover-up in the case. As a result, Zola was convicted of libel, although he escaped to England and later managed to return to France.

Looking at Emile Zola’s natal chart (click here) we can find some similarities with Assange and Snowden:

But let’s move on to more recent events.

BOB WOODWARD AND THE WATERGATE CASE

Possibly one of the most famous affairs in modern times was the Watergate case: the major political scandal occurred in the United States during the 70’s, following a break-in at the Democratic National Committee headquarters in Washington, D.C.

The real scandal was President Richard Nixon's involvement in this event and his administration's attempt to cover it up. After the conspiracy was discovered, chiefly through the work of two Washington Post’s journalists, the scandal also led to the discovery of multiple abuses of power by members of the Nixon administration and an impending impeachment process against the president leading to his resignation.

The two journalist who brought up this scandal were Bob Woodward and Carl Bernstain.

In Woodward’s chart (click here), the Moon is part of a Grand Trine (but also a Kite pattern) with Pluto (Pluto being in the 11th house, the house of collective instances). The Sun sextile Uranus shows an inclination towards collective and social issues.

We do not have details on Carl Bernstain’s Moon  but we know that the day he was born, the Moon was transiting from Libra to Scorpio, potentially creating a  major aspect with Pluto.

So, how can we turn lead into gold when it comes to Moon and Pluto?

The evolutionary call coming from Pluto-Moon aspects or Scorpio Moon may be related to a profound (and often painful) confrontation with secrets and abuse of power, not just in public life but also in personal life. This element, in a natal chart, may be seen as an invitation to bring truth to the surface: first of all personal uncomfortable truths. An invitation to shed full light on one’s emotions, one’s primal instinctual pressures, the darkest side of one’s needs, one’s relationship with power and use of power on other individuals. Doing this we can interrupt the unconscious process of concealment, and psychological removal embedded in Pluto-moon aspects.

What may facilitate this process? I realized that Uranian traits and no planets in earth signs in a chart definitely help (by no chance Uranus is the planet of authenticity) and, on the contrary, personal planets or ascendant in earth signs in the chart inclines people to keep the secrets instead of revealing them. For example:

- Nixon himself has Pluto-Moon but also many planets in earth signs: Sun, Mercury and Mars in Capricorn plus the Ascendant in Virgo. (click here)

- Former Italian Prime Minister Andreotti, involved in all major Italian political mysteries in the 70’s and 80’s, has a loose Moon-Pluto conjunction, Pluto opposite Mercury, but  Sun, Mercury and Ascendant in Capricorn. (Yes, Mars is in Aquarius but its Uranian energy is blocked by a Saturn opposition). (click here)

As you may know, I am Italian so I also researched Italian history and could add to this presentation examples taken from my Country’s history. Due to time constraints I preferred to focus on events that are well known internationally.

If you are interested in this topic, I invite you to send me similar examples taken from your Countries’ history so that I can make this research more complete. Please write to: sonia@astriepsiche.it